GMO labeling: Our right to know what’s in our food

What are GMOs, and how do they affect consumers, farmers and the environment?

GMOs, or genetically modified organisms, are created by mixing plant, animal, bacterial, or viral genes together in ways that don’t occur in nature or in traditional crossbreeding. Over 99 percent of GMOs are made to withstand high doses of pesticides and/or produce their own insecticide.

Despite biotech industry promises, none of the GMO traits currently on the market offer increased yield, drought tolerance, enhanced nutrition or any other consumer benefit. Meanwhile, a growing body of evidence connects GMOs with health problems, environmental damage and violation of farmers’ and consumers’ rights.

Most developed nations do not consider GMOs to be safe. In more than 60 countries around the world, including Australia, Japan and all of the countries in the European Union, there are significant restrictions or outright bans on the production and sale of GMOs. In the U.S., the government has approved GMOs based on studies conducted by the same corporations that created them and profit from their sale. Increasingly, Americans are taking matters into their own hands and choosing to opt out of the GMO experiment.

Unfortunately, even though polls consistently show that a significant majority of Americans want to know if the food they’re purchasing contains GMOs, the powerful junk food and chemical lobby has succeeded in keeping this information from the public. Consumers deserve to know if the food they buy, eat and feed their children contain GMOs and make the informed choice they deserve.

Polls consistently show that a significant majority of North Americans would like to be able to tell if the food they’re purchasing contains GMOs (a 2012 Mellman Group poll found that 91 percent of American consumers wanted GMOs labeled). And, according to a recent CBS/New York Times poll, 53 percent of consumers said they would not buy food that has been genetically modified.

Over 80 percent of all GMOs grown worldwide are engineered for herbicide tolerance. As a result, use of toxic herbicides like Roundup has increased 15-fold since GMOs were introduced. GMO crops are also responsible for the emergence of “super weeds” and “super bugs” which can only be killed with ever more toxic poisons like 2,4-D (a major ingredient in Agent Orange). GMOs are a direct extension of chemical agriculture and are developed and sold by the world’s biggest chemical companies. The long-term impacts of GMOs are unknown, and once released into the environment these novel organisms cannot be recalled.

Because GMOs are novel life forms, biotechnology companies have been able to obtain patents with which to restrict their use. As a result, the companies that make GMOs now have the power to sue farmers whose fields are contaminated with GMOs, even when it is the result of inevitable drift from neighboring fields. GMOs therefore pose a serious threat to farmer sovereignty and to the national food security of any country where they are grown, including the United States. 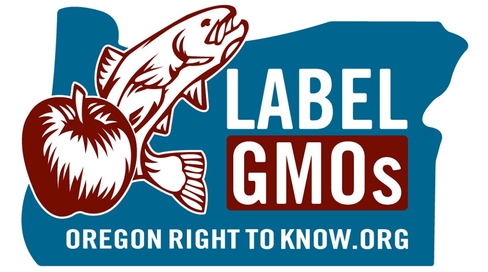 We have the right to know important information about the food we eat and feed our families — such as sugar and sodium levels, whether flavors are natural or artificial, and if fish is wild or farm-raised. We should also have the right to choose whether we want to buy and eat genetically modified food, just like 64 other countries already do.

Oregonians, you have a unique chance to make a difference on GMO labeling. Please vote “YES” for GMO labeling this November!

Labeling GMO foods would assist shoppers who are concerned about the potential effects of increased pesticides and herbicides to make informed purchasing decisions at the store.